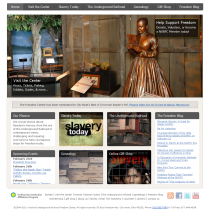 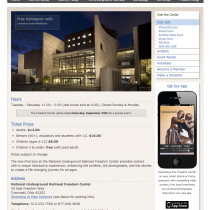 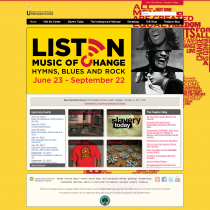 I was lucky enough to work on 2 major overhauls of the Freedom Center's website. The first, in 2007, was focused on replacing an expensive and painfully slow content management system with a custom built tool, a savings of over $50k a year.

We also tackled  the site's unruly structure (over 700 pages with little structure) while improving the ability for users to find information about visiting the center.

The second major overhaul in 2010 was a complete update of the site's design. We focused on putting the most visited sections (Visit the Center & Genealogy) up front, adding a list of upcoming events to the homepage, and promoting new exhibits with a large rotating banner front and center.

All and all this was one of the most rewarding projects I've had the privilege to work on.

"What an improvement! Tremendous, very easy to navigate, lots of interesting content."

"The more I get acclimated to the new design, the better I like it. It feels clean and airy, like it is breathing."